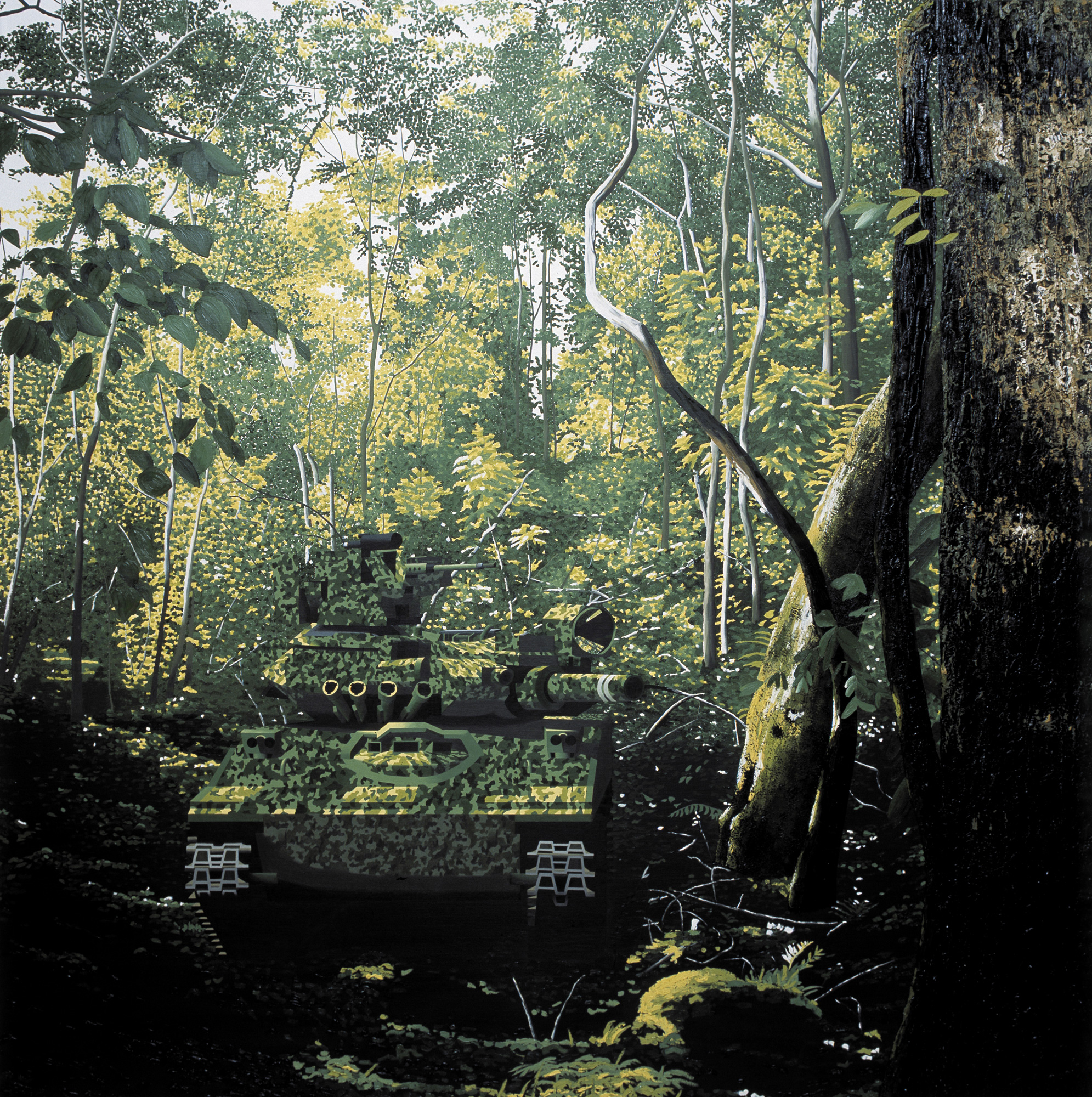 The word ‘Camouflage’ has been tracked back to 17th Century France where it meant a puff of smoke blown into someone’s face with the intent of blinding and confusing them.

The animal kingdom provides brilliant examples of all the essential principles of camouflage, in terms of mimicry, disruption and masquerade. These deceptions have inspired hunters since prehistoric times but latterly the military recognized the importance of camouflage and the use of patterned material has been used to disguise soldiers and equipment since World War One. It has since influenced all aspects of design and now we see this at work all around us, even our mobile phone masts are often disguised as trees.

The two important attributes of camouflage are its emphasis on the domain of the visual, and its strategic nature. Camouflage is a passive, defensive strategy, a survival mechanism. The logic of camouflage is precisely to lose the self in order to preserve the self. But it can also be seen as aggressive, allowing for the element of surprise. The basic characteristics of military architecture have always been its responsiveness and its adaptability to changes in technology and consequent changes in military tactics and strategy.

The birth of modern camouflage was a direct consequence of the invention of the aeroplane. Aircraft were initially used for aerial reconnaissance, their task to spot enemy positions and artillery. This process led to a deadly game of hide-and-seek, each side trying to disguise any build-up of artillery and soldiers and so retain the advantage of surprise. Camouflage had now become a major factor in the combat of deception.

In France, the idea was evolved by Guirand de Sceuola, a portrait artist serving in the artillery in 1914. He painted canvases to throw over artillery not in action. It was soon taken up by the British and German armies. Franz Marc notably commented that his camouflaged tarpaulins charted the developments “from Manet to Kadinsky.” Such was the success of camouflage that by 1917 the Royal Academy had its own Dazzle section.

World War Two saw camouflage pursued on a greater scale. As aerial bombing raids became more commonplace, not only military bases and equipment were screened and disguised, but factories, airfields and railways were too. Factory roofs were painted to look like housing estates, grass airfields were criss-crossed with tar to look like hedgerows, railway stations were covered in foliage, train tracks painted to look like roads. Hollowed tree trunks were even lined with steel and used as observation posts.

Some extremely creative ideas came from this period including the dummy tank shadows, used to give disinformation, allowing a build-up of weaponry elsewhere. The biggest use of dummy weaponry was Operation Fortitude. This operation’s main objective was to fool German intelligence into believing that the British were amassing their troops to invade at the Pas de Calais, rather than what was to be their actual landing place in Normandy. They built false oil tanks, landing jetties, landing craft, anti-aircraft emplacements, aircraft and even inflatable tanks. This ruse was supported by disinformation spread by radio and radar. It was extremely successful. Even after the Normandy landings Hitler still believed that the main attach would come from the Pas de Calais.

In the political turbulence of the late 1960s, camouflage became associated with protest and anti-establishment movements. Protesters against the Vietnam War were one of the first groups to subvert the symbol of military might. High-fashion designers soon realised the power of camouflage decoration, and by the mid-1990s they had jumped on the popular trend.

British fashion designer Hardy Blechman began his camouflage-inspired Maharishi label in 1996. He deliberately subverted the military associations of camouflage, incorporating symbols associated with nature and peace. So our perceptions of camouflage began to change as it was no longer just associated with the military and concealment. “Civilians are attracted to it not because of its military context, but because it represents something else. With its organic shapes and natural colouring, it represents landscape and nature. It has become for many, unconsciously, a first step towards spiritual renewal.”12

The military has long used camouflage to hide their architecture and allow for the element of surprise. By the 1970s, environmental concerns led some architects to reconsider camouflage as a way of merging a building with the landscape rather than dominating it.

In Paris, for example, French architect Emile Aillaud gave residential skyscrapers a disruptive pattern in 1977, earning them the name ‘Cloud Towers’. And in 1992 the Site group produced a building for the World Expo in Seville. They used foliage and a vine-covered trellis to cover buildings and produced an undulating wall of glass with water flowing down it. With climate change becoming an important issue, environmental architecture is harking back to the military lessons of camouflaged architecture. Not only in the sense of visual disguise, covering roof and walls with vegetation, but also looking at environmentally friendly building materials and reducing the carbon footprint and therefore the heat signature of buildings.

The military have continued to adapt camouflage as they have had to consider the non-visual battlefield, as well as the visual landscape. By the 1980s Stealth technologies were introduced that used radar-absorbing materials and made it possible to drastically reduce the visibility of vehicles to radar. They have also developed low emissivity materials designed to thwart thermal-imaging devices, as well as infrared reflectant dyes.

But it is nature, once again, that has offered a solution to really move camouflage technologies forward by allowing us truly to become chameleons. The butterfly wing, with its thousands of tiny scales, creates iridescent colours as light waves bounce off their surface, an effect known as interference. Scientists have been working to create multi-layered fibre fabrics that can be electronically adjusted to change colour to suit the surroundings.

Many of my works have been inspired by camouflage and disinformation. What I find interesting about camouflage is that by its very nature it infers deception and concealment, obscuring physical truth and confusing reality with fiction. Although for me, observing from the military perspective, camouflage is still a language of anxiety and falsehoods, it can also be considered a way of reconnecting with nature. In my paintings nature begins to emulate camouflage as much as camouflage emulates nature. The abstract representation of our natural environment in the form of camouflage is a defence mechanism against these deadly machines, but also a way of bringing us closer to nature as we assimilate to our surroundings. Camouflage has become a signifier rather than just a deceiver.